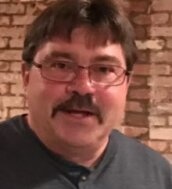 Abie was a Corrections Officer at the Adirondack Corrections Facility in Ray Brook, NY. He retired after 25 years of service so that he could spend more time with his family and friends. If you had the pleasure to know him, you know he had a passion for hunting, fishing, and playing cards. Abie was an avid sportsman. He enjoyed hunting, ice fishing and downrigger fishing on Lake Ontario. He was always up for an adventure with his two sons Shane and Levi or friends by his side.

Abie was an amazing grandfather (Pop Pop) to Brendon, Isabella, Grayden, Lucas, Jesse, and Jayden. The love he shared with each one of them was truly special and unforgettable.

Abie is survived by his loving girlfriend Susan Lawrence of 8 years. His mother, Nancy Bombard. Two sons and daughter in laws, Shane and Melissa Bombard of Wilmington, NY, and Levi and Hollie Bombard of Peru, NY. His two siblings, Steven and Mary Bombard of Au Sable Forks, NY and their two children Jeremy and Chelsea Bombard and Melissa and William Martin of Schuyler Falls, NY. He was predeceased by his father Adrian F. Bombard.

Abie was loved deeply and will be missed by everyone who knew him.

To order memorial trees or send flowers to the family in memory of Adrian Bombard, please visit our flower store.