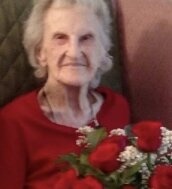 She was born in Au Sable Forks on April 5, 1925, the daughter of Mose A. Bombard and Rose Fryans Bombard.

Ann attended Holy Name School for grades 1-8 and in 1938 entered Au Sable Forks Central Rural School from which she graduated in 1942. She then entered New York State College for Teachers in Albany, N.Y. from which she graduated with a Bachelor of Arts degree in 1946 and a Master of Arts degree in 1952. She later did graduate courses at the University of Buffalo, Syracuse University, and S.U.N.Y. Plattsburgh.

She was predeceased by her parents, her husband in 1972, and her son Will, in 2014. She is survived by several cousins.

A Mass of Christian Burial will be held at Holy Name Church, Au Sable Forks, on Tuesday, September 8, 2020 at 11:00 a.m. with interment to follow at Holy Name Cemetery.

Memorials may be made as Masses or to the Clinton County Advocacy and Resource Center, 231 New York Road, Plattsburgh, N.Y. 12901.

To order memorial trees or send flowers to the family in memory of Ann Cordick, please visit our flower store.