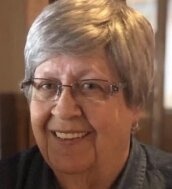 Born in Plattsburgh on July 31, 1940, she was the daughter of Leo and Bessie Aubin. On August 3, 1957, she married Marvin Bombard, Sr., and to this union two sons were born, Michael and Marvin Jr.

Betty served over 20 years as the Tax Collector for the Town of Black Brook. Nothing mattered to her more than her family.

Gone before her are: her husband, Marvin Sr.; son Mike; her parents; and siblings Jack Aubin, Austin Aubin, Evelyn Devins, and Audrey Lapointe

A Mass of Christian Burial will be held at Holy Name Church, Au Sable Forks, NY, at a later date. Interment will follow at Holy Name Cemetery.

Donations can be made to Au Sable Forks Volunteer Ambulance or Holy Name Church.

To order memorial trees or send flowers to the family in memory of Elizabeth Bombard, please visit our flower store.

Mass of Christian of Burial