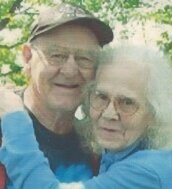 Francis combined his love for travel with his career as an over-the-road trucker, and he spent 60 years doing what he loved and seeing the country. He also worked for years for the Town of Au Sable as a truck driver.

Francis would often plan his road trips around ice cream, including a trip to Syracuse, and loved to stop for garage sales when he could. He carried his job as a truck driver onto the track as a race car driver. Francis and Ortha loved camping, and he enjoyed woodworking, fishing and hunting. When traveling for fun, he loved making his way to Maine.

Francis was a devoted member of St. Augustine's Catholic Church in Peru. He was a member of the Radio Emergency Associated Communications Team, a group of radio operators who assist in emergencies and disasters.

Francis is survived by his children; Donna Prahl, Richard, Michael, Deborah, Allen, Diana, Anthony, Robert, and Kendrick; sisters Gloria Breyette and Audrey Baker; and many grandchildren, great-grandchildren, nieces, nephews and cousins. He was preceded in death by his wife, Ortha; his parents; sons Steven and Carl; and daughters-in-law Kathy and Frances.

Public visitation will take place from 1:00-3:00 p.m., Thursday, June 11, at Thwaits-Zaumetzer Funeral Home in Au Sable Forks, New York, with the funeral service to follow at 3:00 p.m. at the funeral home. Interment will be held after the service at St. Augustine's Cemetery in Peru, New York.

All guests will need to wear face masks in accordance with public health guidelines.

To order memorial trees or send flowers to the family in memory of Francis Baker, please visit our flower store.