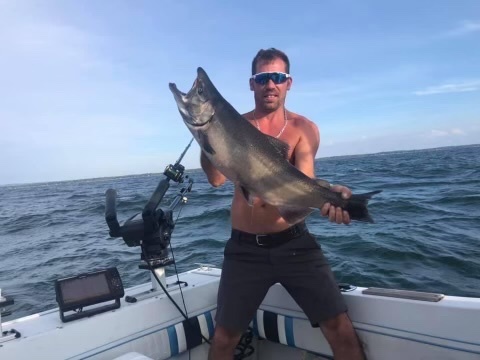 George was a one of a kind party animal. He had a great sense of humor and lived life on the edge. He was a charmer, that's for sure! He was a genuine, carefree, flirtatious, hard-working and tender-hearted man. George had a smile that was not only contagious and goofy, but he had a smile that cured people's bad days.

He was born on July 1, 1986 in Plattsburgh, NY, to George Goyette, Jr. and Michelle Pelkey.

George graduated from Lake Placid Central School in 2004 and went on to start his own contracting business and named it G & G Contracting. Besides his children, hunting and fishing were among his biggest passions. His family and friends would often find him on his boat, "The Pole Dancer". George loved to dance, but he always put his special touch on each dance.

George married Jessica Goyette in 2013 and the couple had 3 children, Kyla, Hayden, Noah. The couple separated in 2021.

George is preceded in death by his sister Magen Goyette; his grandparents George and Mary Goyette.

Masks will be required to be worn at visitation, regardless of vaccination status.

A reception to reflect on George's life will be held following Mass at the American Legion in Au Sable Forks.

To order memorial trees or send flowers to the family in memory of George Goyette, please visit our flower store.