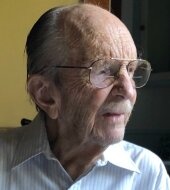 Harold Raymond Wessman, "Wess," as he was known, passed away at his home on Friday, August 21, 2020, at the age of 93. Wess was born in Keene, NY, on November 17, 1926, to Stella (Moody) and Henry Wessman. He attended Keene Valley Central School and after graduating, went to work for General Electric in Pittsfield, Massachusetts as a draftsman. In September of 1950, he enlisted in the Army, where he served as a teletype operator in a M.A.S.H. unit in Korea. While stationed in Korea, Wess was awarded a Bronze Star, a UN Service Medal, and a Korean Service Medal. After two years in Korea, he returned to Pittsfield and GE.

Visiting the Adirondacks when he could, Wess purchased an acre of land on Oseetah Lake in Ray Brook, where he built a cabin with help from his Uncle. "Camp" would be the site of many family memories. Wess was an accomplished marksman and a member of GE's rifle league, where he enjoyed competing and traveling to events with the league. On November 19, 1977, he married Madelyn (Roberts) Pulver of Pittsfield.

Wess retired early from GE in 1981, at the age of 55. He and Madalyn would spend their summers in Keene, in the home his Grandfather Raymond Moody built for his Mother, Stella. They moved to Keene permanently in 1985 and had many happy years there. They attended the former First Baptist Church in Jay, New York. Wess was an avid hunter and fisherman. Their home in Keene was on the Ausable River, where Wess always had a fishing rod at the ready.

Wess was preceded by his parents, his Stepmother Muriel Wessman, his Stepson John Pulver, and his beloved wife, Madelyn Wessman.

Over the last few years, with the help of his family, friends, close neighbors, and caregivers, he stayed in his home as he wished. Wess passed away less than a quarter-mile from where he was born in the house his Grandfather built for his Mother just as he wanted. One caregiver said, "Wess was kind, caring, easy-going, and just a perfect gentleman who asked nothing but sharing a story and a smile. He enjoyed times spent with him, his walks, and a good meal. He was appreciative of all and everyone." A dear friend wrote, "He was a gentleman and always showed his thanks for everything that was done for him, even when he didn't understand what 'all the fuss was about.' I loved his stories about him being Radar from MASH when he was in the service."

Wess is survived by his stepson Donald Pulver, his daughter-in-law, Deborah (Pulver) Heath, his three grand-children Amy, Joseph, and Karen Pulver, his great-grandchildren Abigale, Lily, and Jameson. He also leaves behind his wonderful neighbors Jane, Christian, Wendy, and Peter.

Visitation will be held at the Thwaits-Zaumetzer Funeral Home in Ausable Forks, New York, beginning at 10:00 AM on Thursday, August 27, with a memorial service at 11:00 AM and procession following to Norton Cemetery in Keene where he will be placed next to his beloved Madelyn.

In lieu of flowers, the family asks that donations be made to the Keene Valley Golden Peaks Senior Group.

To order memorial trees or send flowers to the family in memory of Harold Wessman, please visit our flower store.