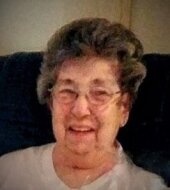 Helen V. (Joyal) McKiernan, 77, Au Sable Forks, NY, passed away peacefully surrounded by family at home on January, 10, 2020. Helen married William "Bill" McKiernan and they were married for 51 years. Throughout life, their family moved around the country as Bill transferred to different jobs. They lived in Florida, Texas, California, Nevada, Kansas, and their home in Au Sable Forks.

One of Helen's favorite pastimes was when they lived in Las Vegas, she would go to Arizona Charlie's every Friday to play nickel video poker. While living there, they made many lifelong friends who were like family. Helen also enjoyed knitting for family and friends and made countless afghans.

Left behind to cherish Helen's precious memories are her devoted daughter Linda McKiernan of Au Sable Forks, New York; and her brother John Joyal of Connecticut; great-great nephew Konnor Joyal; her brother & sister-in-law Edward & Jackie Joyal of Canada; Helen is also survived by sister-in-law Janice McKiernan of Arizona; her brothers-in-law John "Whitey" White of Georgia, and Larry Razzano of Johnstown, New York. She leaves behind many nieces, nephews, great-nieces and nephews, and great-great nieces and nephews; as well as cousins and a few close family friends of a lifetime; along with many lifelong friends in Las Vegas.

Preceding Helen in death are her parents Howard and Elizabeth "Liz" Joyal who were lifelong residents of Au Sable Forks. It's where Helen and her siblings grew up and attended Au Sable Forks Elementary / Jr. High and High School. Helen is also predeceased by beloved infant son Edward "Little Eddie" Joyal; and her husband William "Bill" McKiernan. Helen's siblings who have gone Home before her are: Patricia (Jordon) Righi: Robert "Bobby" Joyal; Margaret (John) Kane;

Helen's family would like to express their sincere gratitude to High Peaks Hospice, especially Ashley and Dee, who cared for Helen so deeply.

To order memorial trees or send flowers to the family in memory of Helen McKiernan, please visit our flower store.