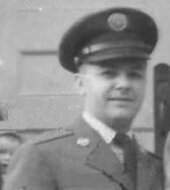 Howard attended Holy Name School and graduated from Au Sable Forks High School. After graduation he worked for a short while at J&J Rogers Co. before joining the U. S. Air Force on Sept. 6, 1948. During his military career he traveled and lived in many places including Colorado, Illinois, Iceland, North Carolina and Newfoundland. Howard served a tour in Vietnam with the 37th Combat Support Group where he received the Bronze Star for Meritorious Service. Retired with the rank of Senior Master Sergeant and was honorably discharged on April 1, 1971 in Plattsburgh, N.Y.

He married for the second time to Shirley Louise Greeno on Nov. 17, 1957. She died on May 10, 1990. From this marriage they had four children, Samuel Keith Aubin, Theresa Louise Scapatici, Janice Ann Brow, Gary Anthony Aubin.

He was preceded in death by his sister, Shirley Frances (Aubin) Elliott who died on August 6, 1987; and half brother, Raymond Wallace Aubin who died July 19, 1991; son-in-law, Marshall Fellion; and by two nephews, Paul Raymond Aubin and Wallace Allen Elliott; also by his beloved pets, Barney I, Barney II, and Barney III.

Calling hours will be held from 6 to 8 p.m Friday, March 11, 2016 at the Thwaits-Zaumetzer Funeral Home. A Mass of Christian burial will be held at 11 a.m. Saturday, March 12, 2016 at the Holy Name Church in Au Sable Forks. Burial will be in the spring in Holy Name Cemetery. Memorials may be made to Holy Name Church. Online condolences and to light a candle may be offered at tzfunerals.com
To order memorial trees or send flowers to the family in memory of Howard Aubin, please visit our flower store.