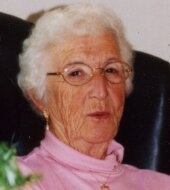 Janet B. Norman died peacefully of natural causes on April 8, 2020 at the VNA Hospice House, Vero Beach, Florida, at the age of 96.

She was known by friends as Jan and by family as Nan. Jan was born on February 23, 1924 in Black Brook, NY to Ovelia Rushia and Albina Gravelle. She attended Au Sable Forks High School and married Francis F. Norman on November 27, 1941. Fran died just days shy of their 50th wedding anniversary on November 17, 1991. Jan worked for many years for the J & J Rogers Company and later for the Au Sable Valley School District. In 1992, Jan made her home in Sebastian, Florida where she and Fran had enjoyed many winters. She later moved to Vero Beach and in 2014 made her home with her daughter Linda and son-in-law Bill Sherman. In 2017, Brookdale Assisted Living Facility became Jan's home, where she enjoyed the activities and most of all the weekly bus rides. Jan was always busy making just one more afghan for her family. She was an avid Mah-Jongg player for many years.

Jan was predeceased in death by her parents, her husband, daughter Deborah, and granddaughter Melissa, and also by her siblings, sisters Mae Senecal, Eva Sharrow, Rose Douglas, and brothers James and Paul.

A Mass of Christian Burial will be held at a later date at Holy Name Church, Au Sable Forks, NY with burial in Holy Name Cemetery. In lieu of flowers, donations in Jan's name may be made to your local Hospice.

Thwaits-Zaumetzer Funeral Home is in charge of arrangements.

To order memorial trees or send flowers to the family in memory of Janet Norman, please visit our flower store.