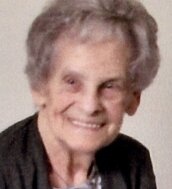 June was born December 31, 1931, the daughter of John and Frances Southmayd. June grew up in Jay & Au Sable Forks, ultimately graduating from Au Sable Forks High School in 1950. June married Stanley J. Bruno in 1950 and had five children. June worked at the Village Inn for many years before going to work at Elizabethtown Department of Social Services until she retired.

Donations may be given in lieu of flowers to Keene Valley Neighborhood House, P.O. Box 46, Keene Valley, New York 12943, where she enjoyed living for five years.

To order memorial trees or send flowers to the family in memory of June Hart, please visit our flower store.