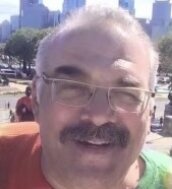 Louis Joseph Macario, 61, passed away on Wednesday, January 20, 2021 at CVPH in Plattsburgh, NY following a long battle with cancer. Born in Ellenville, NY to the late Rose Macario Giovanniello and Louis D. Macario. Lou graduated from Ellenville High School in 1977. He attended Sullivan County Community College, North Country Community College in Saranac Lake and earned his Bachelor's Degree in Laboratory Technology at Upstate Medical University in Syracuse, NY. He earned his Masters in Administration at Plattsburgh State University. He proudly served as Laboratory Manager for many years at AMC Saranac Lake, then at Elizabethtown Community Hospital and simultaneously at Moses Ludington in Ticonderoga.

Lou was a devoted father and is continued in life by his daughter, Trillium Moon Mulvey Macario of Saranac Lake, NY. As a loving brother, nephew, cousin and friend he is remembered by his sister Catherine Vega (Macario) and husband Luis Vega of Dallas, Texas and their daughters Victoria and Gabrielle. Also remembered by his brother Vincent Macario and wife Kathryn and their children Erin, Jonathan and Gina of Tampa, Florida. He is also survived by his Wilmington family: Barbara, Jessica, Anson, Russell, Tara and Caillin Mulvey and Rowan Mulvey of Homer, Alaska.

Lou was the grandson of Vincenzo and Laura Giovanniello and Louis and Irma Macario. Lou is also survived by a large extended family including Monica McPhillips of Sarasota, FL., Fran Sovak of Ellenville, N.Y., Nick Giovanniello of Napanoch, N.Y. and Michael Giovanniello of Tacoma Park, Maryland, as well as many life-long dear friends.

He was an enthusiastic follower of The Grateful Dead and enjoyed attending and volunteering at Blue Grass festivals. Lou easily made lasting friendships, loved canoeing, long distance cycling, camping and living in his Adirondack home.

A Celebration of Life is planned for this summer in the Adirondacks.

In lieu of flowers, please consider donating to the Wilmington Ambulance Service.

To order memorial trees or send flowers to the family in memory of Louis "Uncle Louie" Macario, please visit our flower store.