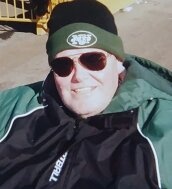 Martin F. Robinson, formerly of Hampton Bays, NY, passed away on March 17, 2021 at his beloved cabin in Jay, NY at the age of 68, with his wife and beloved dogs at his side.

Marty was born on October 11, 1952 in the Bronx and grew up in Hopewell Junction, NY, where he graduated from John Jay High School. He spent most of his adult working life in the restaurant business that he adored. After stints in Florida and Texas, where he ran a restaurant for Willie Nelson, Marty returned to New York and worked for many years at the Star Boggs Restaurant on Dune Road in Westhampton Beach. There he was known as the Lobster Man, who would brag about the thousands of lobsters he cooked for the Monday Night Lobster Bakes.

It was at this restaurant where he met his wife Patti, who worked side by side with him at his lobster bakes and catering jobs. Marty and Patti married on August 2, 2003 on the beach in Sag Harbor, NY. For five years they owned the Before the Bridge Restaurant in Hampton Bays, NY.

Marty went back to college to earn his Bachelors of Arts degree in Human Services from St. Joseph's College in Patchogue, NY. He loved his time working with seniors with Alzheimer's and dementia for both the Town of Southampton and at the Hamptons Center for Rehabilitation.

But anyone who knew Marty best, could tell you that, aside from his wife, his real passion in life was for the New York Jets. He lived and breathed for each football season and always said he bled green. His continuing dream was to live long enough to see the Jets win another Super Bowl; the Jets always let him down.

A celebration of Marty's life will be held in the future, most likely during football season.

To order memorial trees or send flowers to the family in memory of Martin Robinson, please visit our flower store.