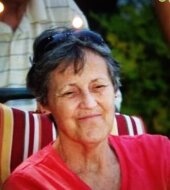 Maureen Murphy Mize, age, 78, passed away on September 27, 2020 at her home in Midland, Georgia. A Funeral Mass will be celebrated at St. Anne Catholic Church in Columbus, Georgia, Tuesday, September 29, 2020. Services in New York State will be as follows: Calling Hours at Thwaits-Zaumetzer Funeral Home, Au Sable Forks, Wednesday, October 14 from 9:00 a.m. to 10:30 a.m. with interment to follow at Fairview Cemetery at 11:00.

Maureen was born on December 14, 1941 during a snowstorm in Keeseville, NY on the way to the hospital in Plattsburgh, NY, the daughter of John James Murphy and Mary Ellen Clark Murphy.

Maureen was in banking as a teller, then head teller at several branches of Home Federal Savings and Loan. After her banking career she worked at St. Anne School as a cashier and eventually manager where she worked there for an additional 15 years. Maureen was under hospice care at home where she graciously faded away into the loving arms of God as he welcomed her. Maureen loved her family dearly and the family's friends were always treated as family.

To order memorial trees or send flowers to the family in memory of Maureen Mize, please visit our flower store.