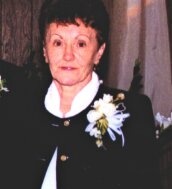 Nina M. Williams 86 of Jay passed away Monday, August 24, 2020 at the Elizabethtown Community Hospital with her family by her side. She was born October 10, 1933 in Jay, N.Y., daughter of the late Morse and Helen (McDonald) Coolidge. Nina graduated from Au Sable High School. She married Arthur Loren Williams on November 19, 1960.

Nina was a hard working woman. She worked as a waitress and in retail up until the age of 83. Nina's greatest love was her family. She was a devoted mother and grandmother. Nina enjoyed spending time with her family. She was a quiet and reserved woman but would speak about her children and grandchildren with intense pride and joy. She cherished every moment she spent with her family. Nina also loved nature especially birds and her frequent rides looking for deer. Nina lived a simple and quiet life that was full of everything she needed; the love for her family and nature.

In lieu of flowers donations can be made in Nina's honor to the Elizabethtown Community Hospital and/or Keene Valley Neighborhood House.

To order memorial trees or send flowers to the family in memory of Nina Williams, please visit our flower store.