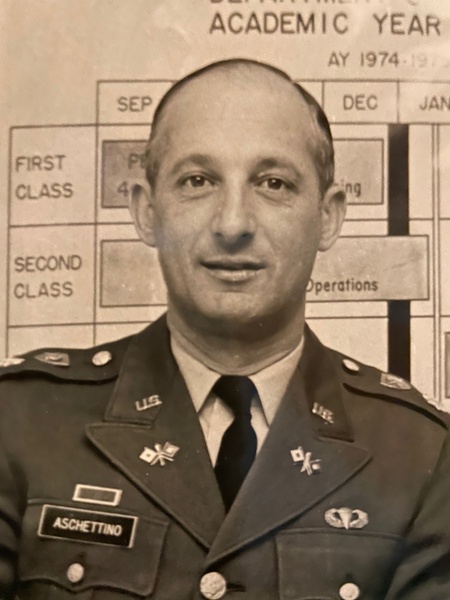 Born in Long Branch, NJ, Richard was the son of Carmine H. & Jennie Squillante Aschettino. He is survived by his sister, Phyllis Myrah, and her husband Jack of Vienna, VA and their four children, seven grandchildren and one great-grandson.

Richard graduated from Red Bank Catholic High School in 1952. After graduating from Pennsylvania Military College in 1956 where he earned a BS in Electrical Engineering, he was commissioned in the U.S. Army. Richard had an exemplary military career where he served honorably until his retirement in 1978. His military accomplishments included several combat missions in Beirut and Vietnam. He also served with the Defense Atomic Support Agency both in Nevada and the Southwest Pacific, where he taught about and tested thermonuclear weapons. After receiving his Master's degree from the University of Kansas, Richard served as the Chief of Military Sciences and Tactics at the United States Military Academy at West Point from 1973 - 1976. While at West Point, LTC Aschettino directed a total revision of the Military Science curriculum. For the first time in Academy history, cadets were awarded academic credits for the study of military science and tactics. LTC Aschettino's innovation to the study of military science at West Point led Army Chief of Staff General Creighton Abrams to remark, "it is the most significant advance in the study of military science at the Academy in forty years." Richard retired from active military service in September 1978. His decorations include: U.S. Army Commendation Medal, Presidential Unit Citations, Bronze Star Medal and the Legion of Merit.

Upon retiring from the military, Richard became the Director of Communications for the XIII Olympic Winter Games in Lake Placid, NY, 1980.

Throughout his retirement, Richard remained an active lecturer, adviser, confidant and friend to many of his former USMA students and their children. He was an accomplished pianist and enjoyed playing Chopin nocturnes on his Steinway baby grand piano and hosting many recitals at his Wilmington, NY log home - where every day was Christmas! Richard had a keen intellect and was known for his strong opinions. He was always the life of the party and a great storyteller. Richard was overly generous with his time, talents, and treasures, reflective of his strong Catholic faith.

Services will be held in New Jersey and are pending, they will be announced once they are finalized.

To order memorial trees or send flowers to the family in memory of Richard Aschettino, please visit our flower store.