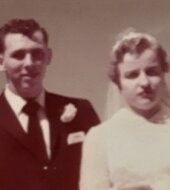 Born on April 4,1936 in Peasleeville NY, to George and Albina Furnia, he was one of eight children.

Mike worked at J&J Rogers Company for several years until their closure, then went to work at Imperial Wall Coverings as the plant manager of the paper division, where he worked until his retirement in 1998. After retiring from the mill, Mike enjoyed several years of woodworking out in his garage. He also enjoyed his time as a member of the Au Sable Forks men's golf league as well as the bowling league at Riverside Lanes. He was an avid hunter and fisherman, but his true passion was attending his three grandsons sporting events.

He is survived by his wife Roberta (Wright) Furnia, two sisters-in-law, Harriet Furnia, and Shirley Furnia, his two children, Becky (John) Nolan, and Keith (Trudy) Furnia. But, cherished to Mike most of all, was his three grandsons, Kellen (Cassie) Nolan, Kyle (Ashley) Nolan, and Kolby Furnia. He is also survived by two special nieces, Jenette Rondeau and Donna Maicus, as well as many other nieces and nephews.

Per his request, there will be no calling hours, or graveside services. Memorial donations may be made to the Au Sable Forks Volunteer Ambulance Service.

Arrangements are in care of Thwaits-Zaumetzer Funeral Home.

To order memorial trees or send flowers to the family in memory of Richard Furnia, please visit our flower store.