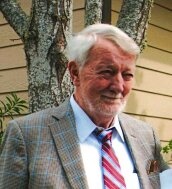 Robert "Bob" James McDermott made his last peaceful gesture on March 24, 2021 by slipping away gracefully and in his words from "a life lived without regrets." A statement made by a friend of Bob's captures his essence very well, "Bob lived a better story than he could tell." Risk, challenge, a service to others, family and adventure fueled his life.

Bob was born to the late John "Jack" McDermott and the late Annette Mary (Owens) McDermott on September 4, 1938 in Utica, NY. He was born in an era following the great depression and his three sisters and his parents shaped his life. His early years were full of mischief. He was prone to challenging his sisters with obnoxious pranks and other misdeeds. One antic included stealing his mother's car while she was at work then returning it before she returned home from work. Annette at one point turned his bedroom into a makeshift jail offering him only a loaf of bread and a pitcher of water to prepare for what she warned would be his potential future.

Bob dropped out of school in the eighth grade and later at age of 17, joined the Navy and served his country for nearly seven years. Highlights of his service included crossing the Arctic Circle in 1957 on the Myles C Fox destroyer. He went on to serve in the construction of the USS Theodore Roosevelt nuclear submarine and on passing a final interview with Admiral Rickover joined as a crewmember. With a good conduct medal and honorable discharge, Bob went on to work as a nuclear plant operator at the Hanford Facility.

Bob met the love of his life Patricia "Pat" Byrne, at an early age growing up in Utica. They were born two days apart, in the same town and attended the same school for a period of time. They married on October 24, 1959. Bob and Pat had three children under the age of four when he started college under the GI Bill. He graduated from Washington State University with honors with a degree in Electrical Engineering and a fourth child on the way. Life was challenging and money was tight in the early days for the family, nevertheless, with frugality in mind he would take his young family on extended camping trips across the West, every summer and on college breaks.

After graduation, Bob joined the Atomic Energy Commission where he worked for 19 years as nuclear plant licensing inspector. With five young kids and Pat in college, Bob decided to leave the AEC to start two successful businesses, Hallmark Energy to provide energy efficiency services, and Loudon Electric an electrical contracting firm that he ran until his retirement.

While their family was still young, Bob and Pat moved from New Jersey to a farm in Virginia where they raised their five children. It was important to Bob and Pat to provide their family with a wholesome life filled with experiences and life lessons gleaned from hard work and farm life. Bob made time to provide service to his community, which included a neighborhood watch, EMT certification to support the community rescue squad and various other local projects. Bob never met a stranger, he was kind and saw the best potential in people, and he had a strong desire to help those in need.

Bob started a tradition of an annual family gathering that has continued for nearly 40 years and grown to include extended family and friends. Many of these gatherings were held in the Adirondacks where time was spent hiking, land and water sports, cookouts, large family meals and creating decades of wonderful memories. These annual gatherings were always an adventure and ranged to include a caravan of campers in Alaska to the jungles of Costa Rica. Bob loved his family and he was loved in return. He always made time to offer a listening ear and advice to anyone that sought him out.

In their retirement, Bob and Pat bought a boat, a diesel duck trawler named, "Slow Dance", obtained his captain's license at age 70 and had many cruising adventures with family and friends. They sailed thousands of miles from British Columbia to South America, through the Panama Canal and eventually finished their cruising life in Florida. During these years they also undertook a driving trip crossing multiple borders from British Columbia to the Panama Canal. In 2008 they moved from Virginia to the Adirondacks making it their retirement home.

Bob and Pat remained married and committed to each other for 62 years, through his many antics, their life challenges and adventures, while maintaining their sense of humor through it all. In the last few months of his ailing health, and during a pandemic he managed a cross-country camper trip, got out to vote, and planned on building a dream log cabin house for Pat and himself on Lake Champlain on a waterfront property. Bob stayed positive and stoic through his failing health, researching and trying best available treatments all while maintaining his dry humor to the end. In his last months and days he was surrounded by family, he would joke with a lagging smile, "it is like an Irish wake around here". He faced his mortality as he did his life, making plans, leaving directives and instructions and taking care of everything possible. He was a friend to everyone that knew him. His wife Pat, two sons, three daughters, twelve grandchildren, a son-in-law, two daughters-in-law, a sister and two brothers-in-law survive him. He is present in our thoughts, our heart and will forever be missed. His dreams will live on, as we; his family continues to complete the vision of his dream house and live up to the example that he was.

To order memorial trees or send flowers to the family in memory of Robert McDermott, please visit our flower store.