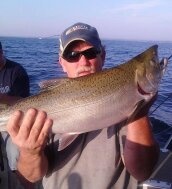 Rodney was born in Elizabethtown, NY on May 11, 1960 to Myron and Theresa Douglas. He graduated from Au Sable Valley Central School in 1979. He worked at Ward Sawmill for 20+ years as a forklift operator.

Rodney was best known for his selflessness. He enjoyed fishing, hunting, camping, NASCAR, and most of all, spending time with his grandchildren.

To order memorial trees or send flowers to the family in memory of Rodney Douglas, Sr., please visit our flower store.