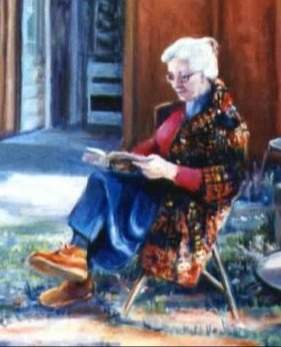 Stevie Capozio left this world peacefully on August 25, 2022. Her spirit lives on.

Born in Manhattan on March 19, 1921, Stevie grew up in a countryside setting on Long Island with her parents, Abraham and Caroline Goldman. Her younger brother, Joseph Goldman, also became a professional artist.

Stevie first visited the Adirondacks as a child. A member of the New York Art Students' League and the Silvermine Guild of Artists in her youth, she studied art at Skidmore College in Saratoga Springs before marrying Mickey Dubin during the Second World War.

The Dubins lived in Fairfield County, Connecticut, where Stevie worked as a writer for Dell Publications, writing stories for characters such as Tom & Jerry and Woody Woodpecker. She also worked as a weekly newspaper columnist, writing and illustrating children's stories, and as a freelance artist for local businesses during this time. The Dubins had three children: Terrie, William, and Alison.

Stevie subsequently earned a Bachelor's degree from Danbury State Teachers College and a Master's degree from Bridgeport University and worked as an elementary school teacher in Fairfield County for 18 years. She began regularly visiting Wilmington, New York, following her second marriage, to James Bowman. The Bowmans founded Camp Whiteface Mountain in the 1960s, a girls' summer camp focused on horseback riding, swimming, hiking, archery, and other outdoor activities. Stevie and Jim had one daughter, Jamie.

Stevie moved to Wilmington on a full-time basis in the early 1980s. Prolific, skilled, and dedicated to her work since her youth, while living in the Adirondacks she accomplished her paramount goal: focusing on her artwork.

She met the painter Joseph Capozio at an art gallery in Florida. The couple subsequently lived and worked in a house above a bend in the AuSable River, at the former site of Camp Whiteface Mountain.

Stevie helped found Mountain Artists of New York, operated a series of art galleries in Wilmington, spent several years as an artist-in-residence at Adirondack Craft Center in Lake Placid, and was the subject of profiles in regional publications and in the international enameling magazine Glass on Metal. She developed a following due to her single-minded devotion to her profession; due to her exceptional determination, resourcefulness, and creativity; and due to the resulting strength of her work.

"I turn on the kiln downstairs in the morning, and it takes at least an hour to heat up, so I'll go back upstairs to paint for a while," she commented during a 2011 interview.

"Then, once the kiln heats up, I'll enamel for a while, and when I get tired of doing that I go upstairs and paint. I'm up and down all the time between the two studios, which is good, because I tend to overwork - not so much anymore, but for years I did overwork everything. I've learned over the years to stop."

"After I do something, I usually think, 'Wow, that's great.' A few days later, I think, 'I could do that a lot better.'"

"Sometimes I'm dreaming, and my hands keep painting and painting," she said, years later. "I can't get them to stop."

She continued painting until her final months.

Extremely politically aware and engaged throughout her adult life, she was a proud Democrat influenced by the intense patriotism and New Deal liberalism of her formative years. She was particularly invested in causes related to conservationism and animal welfare, but regularly donated to a constellation of humanitarian and left-wing causes. She voted for Franklin Delano Roosevelt, met Harry Truman, painted John Kennedy, kept a photo of Barack Obama on her refrigerator, and donated to Elizabeth Warren's campaign for president.

Although she was kindhearted and extremely generous, she was not meek or mild.

Her marriages to Mickey Dubin and James Bowman ended in divorce.

She is also survived by her extended family and by many friends.

Her husband, Joe Capozio, predeceased her.

Her family sincerely thanks all who encouraged, supported, and loved Stevie. We also express our appreciation for the gallery owners and shopkeepers who worked with her over the decades. More than anything else, the support and encouragement of her many friends and her professional colleagues kept Stevie amazingly vital. We are also grateful for the love and dedication of her team of caregivers in the final years of her life.

Her artwork will be treasured for decades.

"I've met interesting and exciting people over the years - some celebrities, some not - and I have had bad things happen, too," Stevie commented a decade ago, during an interview conducted to promote the reopening of Riverbend Gallery.

"I wouldn't trade my life for any other life. As I always say to people who talk about art: I erase more than I put down. I do that with my life, too. I erase the things I don't like. Things I've done that I don't like: Erased. I don't feel guilty about it. Things done to me that I was really furious about: Erased. I don't refer to them at all, unless somebody says, 'What about that?' Then I can maybe pull them out, but I never give them another thought otherwise. But I do think about the great stuff."

In lieu of flowers, her family requests that donations in Stevie's memory be sent to Wilmington Fire and Rescue at 1197 Haselton Road, Wilmington, New York.

Arrangements are in care of Heidrick-Zaumetzer Funeral Home in Au Sable Forks.